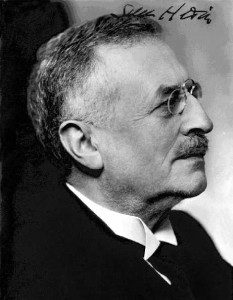 The following is an excerpt from Savitri Devi’s And Time Rolls On: The Savitri Devi Interviews [1] regarding the great Swedish explorer, travel writer, and critical supporter of German National Socialism, Sven Anders Hedin (February 19, 1865–November 26, 1952). For a brief account of his life and work, see his Wikipedia [2] article.

Hedin’s feats of exploration and his magnificent books recommend him to the attention of all mankind. What recommends him to the North American New Right is his devotion to the survival and flourishing of European man and civilization, which he believed was endangered by both Communism and Anglo-Saxon capitalism.

As a Swede and a European, Hedin saw the Second German Reich as the best vehicle for the preservation of European civilization, and when Germany revived under the Third Reich, he reposed his hopes there, enjoying the friendship and admiration of Adolf Hitler, Hermann Göring, and other leading National Socialists.

As this text also makes clear, Hedin had more than a nodding knowledge of the traditional religions and spirituality of Asia.

. . . I came back to England from Iceland at the end of ’47, and there I had to struggle a long time too. Until it was possible for Mr. Mukherji to send me a little money. He was himself in difficulty at the time. He had no job after the war. His past injured him a lot from the point of view of jobs. In fact, he couldn’t send me anything until ’48. But I already had a job. I got a job in the dancing company of Ram Gopal as a dresser.[1] I had to take care of the costumes of the girls and all that. It was not badly paid: £5 a week in England, £10 a week abroad. I was taken to France. I was taken to Norway. I was taken to Sweden. We stayed two-and-a-half months in Sweden, and that took me to June ’48.

In Sweden on the 6th of June, 1948 I met somebody extraor­dinary. I met Sven Hedin.[2] I wanted to meet him. I knew he was one of our people. But they told me, “Sven Hedin meets nobody after ’45. He doesn’t want to meet anybody. You can try.” So I wrote a letter to him, and he said, “Yes, you can come on Sun­day. You can come at 2:00.” I came there at 2:00, and I told him, “You see, we are going to Germany on the 14th.” I had been spending two or three nights, up all night, writing papers.[3] I had intended to spend all my salary in Sweden buying chocolate, sardines, butter, cigarettes, putting a paper in each box and throwing them from the windows of the Nord Express. We were going to pass through Germany. “And I’d like to know, can we have any hope?”

He said, “Why do you say, ‘Can we have any hope?’ Do you have no hope?” I said, “Well, I’m doing this just as an act of defiance, but what to do? Those of Nuremberg, they have killed them.” Sven Hedin said, “Don’t fear. Germany has more such men.” I said, “Yes, but when will they appear?” “They’ll appear in time.” And I said to him, “What about the Führer? Is he dead or alive?” He said, “Whether he’s dead or alive, he’s eternal. What does it matter to you?” I said, “I’ll never see him if he’s really not alive.” “Well, even if you do see him, what difference would it make? The war is lost anyhow. And his ideas are true anyhow, even with a lost war.” I said, “You are right. You are right.”

And with this sort of talk and with the encouragement he gave me, he said, “You can distribute your papers if you like, all through Germany. If you get into trouble . . .” I said, “I don’t care. I don’t care if I spend my life in an Allied concentration camp.” “In that case, carry on.” I felt my wings, my old wings were growing again. He wanted to give me supper, if you please. I never expected it. “It is 7:00 now, you can have supper with me.” I said, “At 7:00 I must be at the theater. It’s a night show. I have to be there. It’s my job.” He said, “All right.” So I went.

The first person I met in the theater was Ben Topf. He looked at me and said, “Mrs. Mukherji, what happened to you?” I said, “Nothing happened to me.” “You look 20 years younger.” I said, “Do I?” I said, “I met a great man.” “What kind of great man?” I said, “Sven Hedin, the great explorer of Central Asia. The one who found out the real way that Lop Nor and other Central Asian lakes go around and round and round. They fol­low the same route.” He said, “For that you are so pleased to meet that man?” And I said, “Yes I am. I am interested in arche­ology and explorations. What can you expect?” He didn’t believe me, of course. He found it queer. He wouldn’t have found it queer for long.

In October ’46, I was staying at 104 Grosvenor Road, in a very quiet room. It was a building for nurses, a kind of hostel for nurses. They used to sleep in the daytime. At night they were on duty. So it was perfectly quiet in the daytime and at night. And that’s what I wanted. I liked physical peace. So I was there on the night of the 15th to 16th of October ’46. And I never read the papers. I didn’t want to read them. I didn’t want to see the evolution of the trial at Nuremberg. I hated it. But I couldn’t sleep. I couldn’t. I couldn’t detach my mind from the fact that I knew, without reading the papers—every­body knew it—that the 11 were to be killed on that night.

I was thinking about it. I was thinking about it. And then sud­denly, I was not asleep, but I felt exactly as I used to feel after my exercises at Hatha yoga ten years before.[4] I was no longer in that room. I don’t know how I went through the walls. I was in Göring’s cell. And I saw Göring just as I see you. He was seated with his hands like this.[5] And suddenly he did like that. As though he saw me and was rather astonished. I had some­thing in my right hand, a tiny little piece of I don’t know what, something I held. And I said to him, “No fear”—“keine Angst.” “No fear. I’m not an enemy. I’m one of your people. I wish I could save you all from this ignominy, but unfortu­nately the heavenly powers gave me permission to save one, and one only, up to my choice, and I chose you because of your kindness to creatures. Because of your solicitude to ani­mals.”

Göring had been a hunter in his youth. He had given it up. And he liked animals, that’s true. But some hunters do at the same time they’re hunters. He had a leopard for a pet. The leopard used to lie at his feet and purr, like a big cat. I knew that. What I knew also was that he contributed with the Führer to the setting up of the Reichsjagdgesetz,[6] a book thick like that. It is much more than a regulation of hunting. It’s a protection of nature. Traps are forbidden. One man hunting by himself is forbidden. It must be two. If an animal is wounded the other one will shoot it. Mustn’t kill fe­males. Mustn’t, mustn’t, mustn’t, mustn’t. The Führer could not forbid hunting altogether. He did what he could to lessen the effect, and Göring had a part of that.

That I knew before I got into this kind of queer state. I said to him, “Take this,” and gave him what I had in my right hand. I said, “Take this, and don’t allow these people to kill you as a criminal. You are not one. Anything but. Now I must go. Good-bye. Heil Hitler!” And I vanished. And I didn’t see any­thing of the kind. I fell completely unconscious after that. I saw Göring, and I was unconscious. I gave him whatever I had to give him. I was unconscious.

I woke up. It was 10:00 in the morning. I never wake up at 10:00. I wake up at 6:00. I never sleep like that. I opened my eyes. I said, “What a queer experience I had. Where did I go last night?” Anyhow, I bathed quickly, and I went downstairs. It was a rainy day, drizzly. I never bought a paper as I told you. I wasn’t going to buy the paper on the 16th of October, anything but. But I couldn’t help seeing the headlines on the papers. There was a newspaper kiosk just opposite. Headlines like that. Eight centimeters high. “Göring found dead in his cell, half past two in the morning. Nobody knows who gave him the poison. Potassium cyanide.”

I’ll never forget it. And I felt cold all over my body. It seemed to me that I saw the Nataraja, the dancing Shiva, as he is presented in Hindu tem­ples, dancing in the clouds. And I said, “If this has been done through me, use me in greater things still. If it’s me, that’s the best thing I did in my life.” I don’t know what really happened, to this day. I know what experience I had. I know what I felt. I know what I saw. I don’t know anything more. Is it a genuine experience? What is it? I just don’t know. I don’t pretend to know, and I don’t like to speak of what I don’t know.

Less than two years later, on June 6th, 1948, I met Sven Hedin, who is a scholar of Tibetology and has roamed all over Central Asia and seen things in Ladakh and Tibet. I asked him, “What would people in Ladakh or Tibet think of this?” He said, “My dear, they would find that the most natural thing in the world. That is no problem for a Tibetan or for a Ladakhi, for a Buddhist Lama. No problem at all. You went into the astral plane. You gave Göring some astral potassium cyanide, and it materialized in his hand. He took it and died, instead of being hanged.” I said, “I wish I could’ve done it for the 11.” “Well, you could for one. Be thankful that you could for one.” That’s what Sven Hedin told me. I don’t know any more than that. I never had a psychic experience in my life. That’s the only one.

1. Ram Gopal (1912–2003) was one of the leaders of the revival of classical Indian dance and one of the most celebrated and widely traveled dancers of the 20th century. See his Rhythm in the Heavens: The Autobiography of Ram Gopal (London: Secker and Warburg, 1957).

2. On Hedin and Savitri’s first propaganda trip through occupied Germany, see Gold in the Furnace [3], ch. 4, “The Unfor­gettable Night.”

3. Savitri supplies a translation of the flyer in Gold in the Furnace: “In the midst of untold hardships and suffering, hold fast to our glorious National Socialist faith, and resist! Defy our persecutors! Defy the people, defy the forces that are working to ‘de-Nazify’ the German nation and the world at large! Nothing can destroy that which is built in truth. We are the pure gold put to test in the furnace. Let the furnace blaze and roar! Nothing can destroy us. One day we shall rise and triumph again. Hope and wait! Heil Hitler!” (Gold in the Furnace, 34).