This is just to send you a glimpse of the right of my bed just now, while I am writing: three of my six cats (the other, a big one, like the one on the right of this paper) is curled up upon a cushion, on a chair — himself a living white and tabby velvet cushion) are lying there just in the position I tried to sketch them for you — or were, for they have moved in between (The one on the front is black and white, the two others yellow [ginger]: one white and ginger [the big one]; the other, a kitten I brought home some two or three weeks ago, all ginger, with darker spots [like a leopard]). 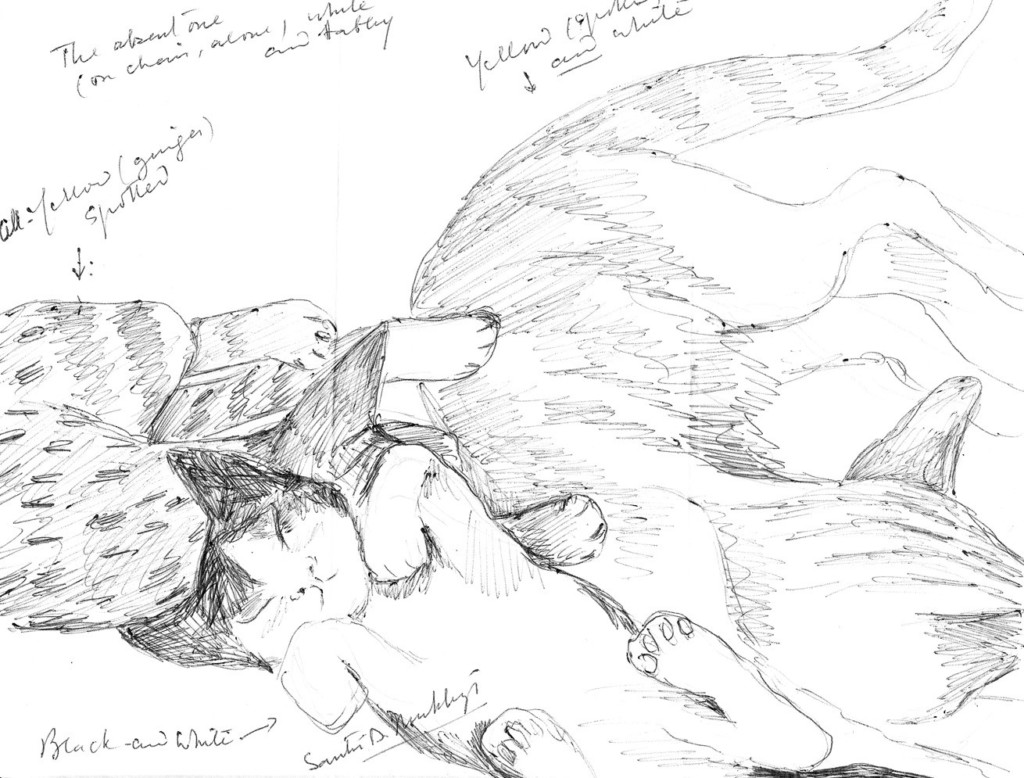 Outdoors the rain is pouring: the “monsoon” — rainy season, from beginning of July to mid-September, or a little later — has started. It has its advantages: first, fewer people in the streets (though not much fewer; you can’t imagine how sick I am of crowds). My ideal is Sweden: few people, but all beautiful (the Swedes are amongst the best-looking Aryans, along with North Germans) and plenty of forests. Unfortunately, it is no good preaching this on a wide scale: it would only mean a world overrun by the inferior races, that breed like rodents. All schemes of “family planning for the (non-Aryan) masses of India have failed: it is admitted officially now. Only the higher (Aryan) castes consent to limit their numbers, with the disastrous result that if “democracy” is not swept away and a system based upon racial valued introduced (according to purest Hindu Tradition) India will be practically de-Aryanized within a few centuries — a terrible pity when one remembers that our race ruled this place (even under temporal non-Aryan rule — Turkish, or Mongol dynasties) — the key jobs were in the hands of the Aryan castes. It is the British who first promoted the non-Aryan on a wide scale, already from the nineteenth century — out of “equalitarian” outlook. The Portuguese had done the same and encouraged Christianization and race-mixing. Albuquerque 1510. The Inquisition started in Goa in 1560 and remained . . . 300 years!!! And woe to the Hindu (of any caste) who had (for any reason) accepted Christianity (be it outwardly) and was caught “relapsing” into traditional uses (chewing a betel leaf per example!). If reported to the Holy Office, he was good enough to be burnt at the sate at Campo San Lazaro, just outside the town — after spending weeks or months in the awful Inquisition prison, with water up to his waist during the rainy season. (I saw the place — was three weeks in Goa, 1945, before the departure of the Portuguese.)

I have just been reading, in White Power — kindly sent to me; I must write and thank Matt Koehl — about crime and drugs in the U.S.A. and the obnoxious tendency of pampering the criminal instead of bumping them off. The same everywhere — it is a worldwide attempt to destroy us as a race, teleguided[*] by these gentlemen of the B’nai Brith. When I used to be teaching B.A. classes in France (as a stop-gap teacher, 1960 to 1968-69) the textbooks provided for my pupils would repeatedly state that “so-called criminals” were in fact but “poor sick people” that had to be “treated” and slowly “reintegrated” into society, after being “healed” — not punished! The people who write or distribute or encourage the spreading of such literature, I say, should be raped and disabled for life (be they men or women) by their darling “sick” pets — and see how they like it. Perhaps they are themselves perverts and would “like it” — who knows? — in which case they should themselves be bumped off along with their protégés.

“It is Hitler or hell” I often said. And I see that the victors of 1945 are making it hell for the whole world that refused Adolf Hitler — and (unfortunately) — for us also, who accepted Him and cheered Him — for us especially!

I am waiting for the printer to send me the galleys of forma 13 of my book (which will have about 23 formas). So as you see, more than half is now printed (up to Chapter VII included). Forma 13 begins Chapter VIII — on “The Two Great Contrary Movements of Modern Times” (i.e., Communism and Hitlerism) in which I try to show that the latter is the modern expression of eternal Tradition, while the former is anti-Traditional, counter-initiation, a diabolical device in the service of world-decay. You see that — contrarily to what you had first thought — this book is anything but an “autobiography” — even if there be, now and then, some autobiographic fact related as a means to stress some general truth.

I am longing for it to progress. But I am getting it printed as fast as my means (and the fact of not being on the spot, in Calcutta) permit me. If I went to Calcutta to hasten it up, I should lose the one or two pupils that allow me to live during this period (May, June, July, August) in which I receive no money from the school (but at the end of August, if I get a class during that month). And then how shall I deal with the printer, who, knowing my situation, will not take the risk of printing “before hand”?

How are you? Well, I hope. Had any holidays?

[*] The transcription “teleguided” is a guess. If correct, it is probably a neologism for “guided at a distance.”

Chapter 14 of Gold in the Furnace