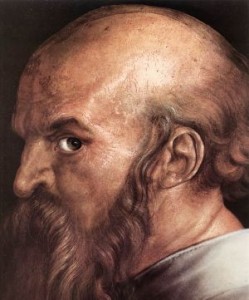 In her pamphlet Paul of Tarsus, or Christianity and Jewry, Savitri Devi argues that Christianity is not the creation of Jesus Christ, but of Saint Paul.[1] Savitri even entertains the possibility that Jesus never existed. And even if he did, she argues, the teachings attributed to him in the Gospels are those of an impractical visionary, not the founder of an organized religion. Instead, the true founder of Christianity is Saint Paul, originally known as Saul of Tarsus.

Paul was both a deeply orthodox Jew and a man of cosmopolitan education and experience. In keeping with his orthodoxy, Paul initially persecuted the followers of Jesus. Then came his conversion on the road to Damascus. Savitri argues that this conversion was not a flash of mystical insight, but a stroke of political genius. Paul’s understanding of the world of the non-Jews was far better than that of his superiors in Jerusalem. In light of this understanding, he realized that Christianity could become an ideal tool for establishing the spiritual and economic domination of Jewry over the rest of the world.

Christianity contributes to Jewish domination in at least two ways. First, Christianity gives a special Providential role to the Jews in the religion of non-Jews. Second, Christianity preaches the equality of all races and men. This leads to the mixing of races and the decline of national consciousness among non-Jews. But as long as Jews retain their racial consciousness and solidarity, they will gain greater and greater advantage as these decline in other peoples.

Savitri’s account of Paul is heavily influenced by Nietzsche’s in The Anti-Christ.[2] Like Savitri, Nietzsche describes Jesus as an impractical idealist, not as the founder of a religion. Jesus was a “free spirit,” entirely detached from the material world and fixed intellectual formulas. His teaching was his life. He offered, “A new way of living, not a new belief.”[3] Redemption is a way of living by which one feels oneself in Heaven while in the midst of Hell: “The ‘Kingdom of Heaven’ is a condition of the heart—not something that comes ‘upon the earth’ or ‘after death’.”[4]

Like Savitri, Nietzsche regards Paul as the true founder of Christianity. Nietzsche describes the Jews as, “a nation of the toughest vital energy which, placed in impossible circumstances, voluntarily, from the profoundest shrewdness in self-preservation, took the side of all décadence instincts—not as being dominated by them but because it divined in them a power by means of which one can prevail against the ‘the world’.”[5] Nietzsche numbers “the Christianity of Paul” among these decadence movements.[6]

Unlike Savitri, however, Nietzsche does not think Paul’s sole or primary motive is the love of Jewry, but rather the morbid hatred of the physical and spiritual health epitomized by the culture of Greece and the empire of Rome: “Paul was the greatest of all apostles of revenge”[7]—the revenge of the botched and inferior against the higher types of humanity, against the natural aristocracy. Paul was,

Chandala hatred against Rome, against “the world,” become flesh and genius, the Jew, the eternal Jew par excellence. . . .What he divined was that with the aid of the little sectarian movement on the edge of Judaism one could ignite a “world conflagration,” that with the symbols “God on the Cross” one could sum up everything down-trodden, everything in secret revolt, the entire heritage of anarchist agitation in the Empire into a tremendous power.[8]

Paul’s main weapons were the concepts of equality and of the immortality of the soul: “The aristocratic outlook has been undermined most deeply by the lie of the equality of souls.”[9] And: “To be able to reject all that represents the ascending movement of life, well-constitutedness, power, beauty, self-affirmation on earth, the instinct of ressentiment here become genius had to invent another world from which that life-affirmation would appear evil, reprehensible as such.”[10]And: “This was his vision on the road to Damascus: he grasped that to disvalue ‘the world’ he needed the belief in immortality, that the concept ‘Hell’ will master even Rome—that with the ‘Beyond’ one kills life.”[11]

Savitri’s motives in writing and publishing Paul of Tarsus are somewhat enigmatic. Written in a single day and just over 3,000 words in length, she published it in 1958 as an eight-page pamphlet alongside her magnum opus, The Lightning and the Sun (432 pages) and her devotional travel-memoir Pilgrimage (354 pages). Also noteworthy is the fact that Paul of Tarsus was written in French. Although Savitri’s mother was English, and Savitri learned English in her perambulator and wrote most of her books in English, French was the language of her education. Her first three books were written in French, and in her old age she returned to the French language for three other books.[12] All of the books and essays she published in between were in English. Except for Paul of Tarsus.

Furthermore, Savitri maintained her interest in Paul for many years. In an interview recorded in November 1978 and again in a letter dated 7 June 1979, she heartily recommended three books by the French historian Robert Ambelain: Jésus, ou le mortal secret des Templiers, La vie secrete de Saint Paul, and Les Lourds secrets du Golgotha.[13]According to Savitri, in these books “the whole Christian legend is shown . . . as a shameless hoax. (The hoax of the first century—as tremendous as that of the Twentieth, by Arthur Butz.).”[14]

Savitri reported that, according to Ambelain, Jesus was, “an anti-Roman agitator and nothing else. No teacher of any sort of religion.”[15] This is, of course, the complete opposite of the view she expressed in Paul of Tarsus that Jesus was a purely apolitical religious teacher. But both positions are united in rejecting the idea that Jesus was the founder of an organized religion.

Savitri was impressed by Ambelain’s claim that Christianity was the creation of Paul: “According to Ambelain, he [Paul] took the person of that Jewish agitator and made it into a mystic figure, added to him all the characteristics of these age-old vegetation gods, Mithra, Osiris, Adonis, and others. . . . He made him [Jesus] into a world figure . . . And by this doing that, he spread an influence of Jewry on the whole world.”[16]

Why was Savitri Devi so evidently fascinated by Paul of Tarsus? I would suggest that consciously or unconsciously she regarded him as a role model. After the Second World War, Savitri consoled herself and her comrades by likening their situation to that of the followers of Jesus after his crucifixion.[17] Things seemed hopeless, but then Paul created Christianity, and in three centuries Christianity grew strong enough to conquer Rome. In reality, Jesus was either an impractical idealist or defeated political leader, but not the founder of an organized religion. Paul created Christianity by endowing Jesus with a mystical character and casting him as the hero of the cosmic drama of the Fall, Redemption, and Final Judgment of man.

This is exactly what Savitri Devi did with another defeated political leader, Adolf Hitler. In The Lightning and the Sun, Savitri endows Hitler with a mystical character and a cosmic significance by situating him in the cyclical drama of the Hindu cosmology. Hitler was a “man against Time,” a man who sought to destroy the Dark Age, the Kali Yuga, and initiate a new Golden Age, a Satya Yuga. Savitri identifies Hitler as the penultimate Avatar of the God Vishnu, the one who prepares the way for the last avatar, Kalki, who will bring an end to the Kali Yuga.[18] In sum, my hypothesis is that Savitri’s goal, like Paul’s, is the creation of a new religion as a vehicle for the triumph of her ideals, a religion in which Hitler is Christ and Savitri Devi his Saint Paul.

2. Friedrich Nietzsche, Twilight of the Idols and The Anti-Christ, trans. R. J. Hollingdale (New York: Penguin, 1990). The Anti-Christ was written in the latter part of 1888 and first published in 1895.

18. Balarama is usually named as the penultimate Avatar of Vishnu. But some strands of Hindu tradition give his place to the Buddha.

Savitri Devi’s Gold in the Furnace