Back
About Her — Greg Johnson Print

Greg Johnson Interviewed About Savitri Devi on the BBC 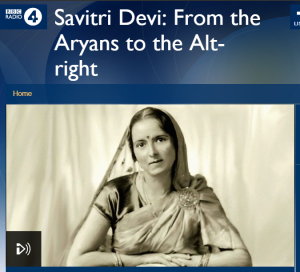 Maria Margaronis is a Left-wing journalist of Greek descent who mentioned that she has a Jewish husband. (The producer, Shabnam Grewal, is a British citizen of Sikh descent.) Thus Maria was obviously not predisposed to agree any sort of White Nationalism, much less someone as far out as Savitri Devi, which she makes clear in both the article and the documentary. That said, I was impressed by the care, effort, and discernment Maria put into her research. For instance, I thought the excerpts from Savitri’s autobiographical interviews were quite well-chosen.

It is always a gamble to speak to Left-wing journalists, but in this case, I think the results help White Nationalism more than they harm us.

The interview lasted more than an hour, but only a few bits made it into the documentary. Nevertheless, I thought the segments were well-chosen, and I believe that I acquitted myself well. Please share your thoughts below.

I want to thank Maria and Shabnam for including me in this project and for being unfailingly personable and professional in our dealings.

I also wish to thank Counter-Currents’ readers and donors for making this interview possible while I was in London for the Jonathan Bowden Dinner and the London Forum.