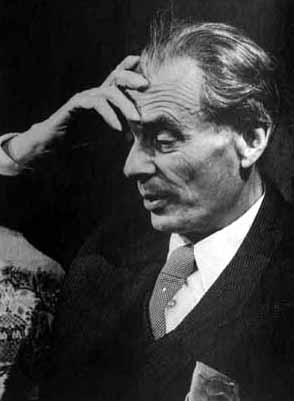 The earliest known extant letter by Savitri Devi is about the religion and philosophy of the pharaoh Akhnaton and has a most distinguished addressee: Aldous Huxley (1894-1963), the novelist, essayist, and spiritual seeker whose many works include the classic dystopian novel Brave New World (1932); The Perennial Philosophy (1945), a compendium of the ideas of mystics, East and West; and The Doors of Perception (1954), one of the first works on the mystical significance of psychedelic drugs.

Savitri published this letter in the Preface to her 1946 book A Son of God: The Life and Philosophy of Akhnaton, King of Egypt.1 Huxley also gave her permission to quote excerpts from two of his letters, the one that prompted her letter and his reply to her. Savitri’s defense of Akhnaton’s this-worldly mysticism clearly owes much to Nietzsche’s critique of other-worldly religions and his exhortations to remain loyal to the earth, the body, and the physical world in general.

. . . Nor do I feel altogether happy with a nature religion, however exalted and universalised, as Akhnaton’s Sun‑worship unquestionably was. Such a religion affirms that man is essentially at home in the world. But surely the truth is that one has to earn the right to be at home in the world by first dying to the world and to self. Only by the selfless can eternity be perceived within time, nirvana be experienced within samsara. Judging by his hymns to the Sun, Akhnaton seems to have believed that one can know God in the world without first dying to world and self. But all the masters of Eastern and Western spirituality would say that this was an illusion. Akhnaton’s insistence on ‘living in truth’ and his cult of simplicity and naturalness are reminiscent of Taoism. But, whereas Taoism constantly harps on self‑naughting and humility, and inculcates the practice of a kind of yoga aimed at purifying the mind and making it capable of knowing the primordial Tao or Godhead, beyond the personal God and the manifest world, Akhnaton’s Sun‑worship seems to do neither of these things. For these reasons, I find it difficult to share your very high estimation of the Aton cult. Akhnaton strikes me as being one of those who, in the words of William Law, have turned to God without turning from themselves. His religion, therefore, is only one half of a true world‑religion. . . .3

I can say nothing save that I personally seek, in a religion, something different from that which you seek, along with all those who are not “essentially at home in the world.”

The God Whom Akhnaton reached, in fact, as you say, “without dying to the world and to self,” was an impersonal, immanent God, non‑distinct by nature from the Universe—the “Heat‑and‑Light‑within‑the‑Disk” identical with the Sun‑disk itself; Cosmic Energy, inseparable from and ultimately identical with what appears to our senses as “matter”; the only God, it seems, if any, that one can still look upon, today, as being in perfect keeping with the latest conclusions of modern science. He was, at the same time, a God non‑distinct from the deeper Self of the young Prophet of the Sun; a God “within his heart,” as he says in his hymns, and knowable only to one who is “His Son, like unto Him without ceasing.”

That God, grasped both in the material world—in the fiery orb of the Sun—­and in the deeper Self, seems to me to be the self‑same One that so many seers of East and West have grasped within their deeper Self alone—the “Principle of integration of all things,” as you characterise Him in so many passages of your books.

And if to you “the world” means nothing but this material earth with its pleasures and its luxuries, then I would say that, in my humble estimation, Akhnaton’s glory—nay, his unique position among the great religious teachers of all times—lies precisely in the fact that, far from turning his back to the sweetness of corporeal life, to the beauty of forms and colours, to the refined enjoyments of the senses, he reached the consciousness of the One Reality in the midst of it all and through it all, naturally—as though it were without effort.

It is possible, even probable, that most of those who have realised the Divine could not have done so by taking his course. It is possible that hardly any men are so naturally well‑balanced as to be able to take it. But I fail to understand why you seem to believe that his course, followed consistently to its very end, “cannot” lead a man to his ultimate goal of God-­consciousness, and why the Religion of the Disk, with its spontaneous, joyous wisdom, is, in your eyes, “only one half of a true world‑religion.” Could not that very same criticism be brought against any religion which deliberately shuns one half of reality—namely, the reality of the beautiful natural world in which Akhnaton was indeed “at home,” as all men are, it seems, who happen to be predominantly artists?

And I cannot help believing that those few who are, really, “essentially at home in this world,” and who, at the same time, can and do, in it and, through it, acquire the consciousness of its eternal Essence; those who, like Akhnaton, “transcend the beautiful world of forms and colours—the world of the senses—without ceasing to feel its infinite value” (I take the liberty of quoting these words from my unpublished book), are more complete, more harmonious, more endowed with a godlike elegance even than the great ones who have to “die to the world” in order to transcend it. The approach of most of these men to God is, it would seem, mainly metaphysical and ethical. Akhnaton’s approach is essentially aesthetic. His rationalism itself seems, no less than his idea of moral truth, an outcome of his sense of beauty. At least, this is how I personally feel about him, and I have tried in my book to present him in that light.

But if by “the world” you mean more especially those attachments and interests that stand in the way of a man’s absolute faithfulness to the principles he professes (and thus, in the way of his soul’s progress), then I would say that no one “died to the world” more completely than Akhnaton himself. With serene detachment he brushed aside his highest imperial interests; nay, he renounced all the chances of survival of his beautiful religion as an organised cult among men—as a cult that, had be won for it, then, a solid hold over Egypt, might have been, perhaps, one of the great living Cults of the West, still today. He renounced them without regret, realising that truth is more precious than success. Was not that, in a way, “dying to the world and to self”? And if he was able to do it, is it not natural to suppose that, had it been necessary for him to give up the ordinary enjoyments of the world for the sake of that same truth, he would have done so no less easily?

But the very nature of his religion made such renunciation unnecessary. And I repeat, it is precisely that perfect blending of pagan joie de vivre, of rational thought, and of a love more universal than that preached in the gospels of all man‑centred religions—a love of all creatures in Him Who feeds them and shines over them—it is that union, in one Man, of an aesthetic outlook, forestalling that of the Greeks, and of such loving kindness as equalled only by that of some of the great Indian teachers (but without the asceticism of these nor of the Christians); it is that plenitude of harmonious life—physical and spiritual—in which immanent Godhead, ever­present, is continuously felt, which compels me to look upon Akhnaton as a person unique in history, and to assert that he fully deserves the title which he claims in his hymns, namely, that of “Son of the Sun,” i.e., “Son of God.”

With my little knowledge of Taoism—of which I only have an idea through an English translation of the Tao‑Te‑Ching and comments upon it in English—I believe, as you do, that Akhnaton’s insistence on “living in truth” and his cult of “simplicity and naturalness” are reminiscent of it, or rather that the wisdom of the Chinese sage is reminiscent of that of Akhnaton, more than eight hundred years older than it. But I fail to see much difference between Lao‑Tse’s “primordial Tao” or Godhead, and Akhnaton’s “Shu,” i.e., “Heat‑and-Light” — Energy — “within‑the‑Disk”; his “Ka” or Soul of the Sun, which seems to be, as I said in the beginning, none but the impersonal Essence of all existence, material as well as immaterial—not a personal God of any description.

Only the approach of the young Pharaoh to God impresses me—and appeals to me—as being essentially that of an artist, not that of a metaphysician.5

. . . Perhaps I have failed to understand Akhnaton; but it still seems to me that he has not solved the fundamental human problem—to reconcile eternity with time—and that the true solutions are to be found elsewhere, in Lao‑Tze, for example, in Zen, in Eckhart. . . .7

1 Savitri Devi, A Son of God: The Life and Philosophy of Akhnaton, King of Egypt (London: The Philosophical Publishing House, 1946). All subsequent English-language editions bear the title Son of the Sun: The Life and Philosophy of Akhnaton, King of Egypt (San Jose, Cal.: Supreme Grand Lodge of A.M.O.R.C., 1956). These editions omit the Preface to the first edition.
2 Attribution conjectural. Huxley resided in Llano, California at the time this letter was written, but he may of course been elsewhere when he wrote it. See Aldous Huxley, Letters of Aldous Huxley, ed. Grover Smith (New York: Harper and Row, 1969), 511-512. <
3 A Son of God, ix.
4 Savitri was so depressed about the impending Axis defeat in World War II that in October 1944 she left Calcutta and traveled around India until July 1945, when she returned to Calcutta. She took with her the manuscript of A Son of God, which she had begun in Calcutta in May 1942. She completed the book in New Delhi on 24 January 1945. Savitri made a point of avoiding newspapers and news, and it is likely that she had little contact with her husband, A.K. Mukherji, back in Calcutta. Huxley’s letter to which she is responding is dated 27 November 1944, which means that it arrived during her absence. It is reasonable to conclude that she read Huxley’s letter and penned this reply shortly after her return to Calcutta. See Savitri Devi, And Time Rolls On: The Savitri Devi Interviews, ed. R.G. Fowler (Atlanta, Georgia: Black Sun Publications, 2005), 36-38.
5 A Son of God, x-xii.
6 Attribution conjectural. See Letters of Aldous Huxley, 538.
7 A Son of God, xi-xiii.