A Selection from her Correspondence and Interviews — Edited by R.G. Fowler 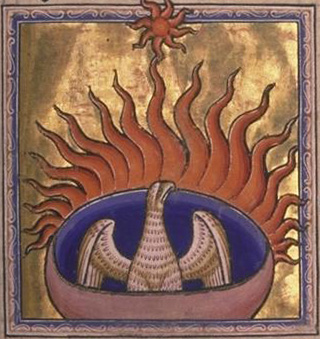 The Phoenix from the Aberdeen Bestiary.

[Mr. Mukherji] wished to die. “Better die than get born after 1945,” he used to say. And his one other wish was not to get born again, but merge into “cosmic consciousness.”

Personally, I wouldn’t mind being born again—again being sixteen, again being twenty, and thirty! But surely I dread being fifteen months old—and two years, and three—again.

Now reincarnation is one of the only two beliefs that unite all Hindus of any caste, from the Brahmin to the untouchable, that is to say, the harijans.1 They call them harijans, that is to say, “people of god.” But every creature is a person of god. It doesn’t mean anything. They’re outcasts, the lowest out­casts, generally the aborigines. What is a harijan? He’s either an aborigine, or else he’s a man of any caste who has done something awful or whose ancestors have done something aw­ful, and was outcasted. And when you were outcasted in India, your descendants are outcasted also, for all times to come. From the topmost Brahmin to the lowest harijan, everybody believes in reincarnation.

That is to say, there is in every living creature, not in every man—reincarnation is for animals and plants also, not only for people—there is in every living creature a visible body and more than one subtle body, and these subtle bodies separate from the rest of the physical body at the time of death. And they constitute what they call the ego. That ego, if it is not al­ready merged into the universal ego—that is to say, if a man is not what the Hindus say “liberated”—that ego takes a new birth, in some other body, animal or human or plant. Plants live. Even minerals have some kind of life. There is nothing in the world that’s not absolutely soaking in some kind of life, some kind of vibration. So the belief is not that when you are good you are reborn in a higher social status. That’s nonsense. You will not be born rich if you are poor. If you wish to be rich, if you are good, you don’t become rich in the next life, not necessarily. It might be the contrary, that the rich man is re-born as a beggar. He is reborn in that state which will be the best for his spiritual evolution. If it is better for his spiri­tual evolution for him to be born in a very low social status, he will. And the low social status does not mean in India a low race. There are Aryans and there are non-Aryans. There are Brahmin beggars. And there are untouchables who are mil­lionaires. It has nothing to do with money. And that’s one of the things I like the best of it. An Aryan, or supposed Aryan, say, a Brahmin, if he is a beggar and he goes to marriage ceremony, they put him inside at the best place, the most hon­orable place, with the other Brahmins. If a multi-millionaire untouchable goes to a marriage ceremony, he’ll be put outside with his fellow untouchables. He will not be given a better place because he has money. Money or learning. Even learn­ing. Brojendranath Seal2 was a scientist, a very great scientist. He was a Seal.3 That’s a very low caste in Bengal. Seals are a very low caste. He was never given greater status.

Learning can be acquired. Money can be acquired. Only blood cannot be acquired for the Hindu religion. And that’s what I like in the Hindu religion. It’s the only real, living re­ligion compatible with National Socialism. It gives priority to what cannot be acquired with any means. You are born with a race. You can’t change your race whatever you do. You get reborn if you are not perfect. That is to say, if you have not gone through all the experiences resulting from the algebraic sum of your good and bad deeds.

Good and bad mean nothing. Good is what is according to the nature of your soul. And bad is what goes against nature. That’s all. In Hinduism, you do not have to kill your instincts. Not at all. In fact, if you go to a yogi and ask him to be your master, he asks you some questions. Among the questions there is this, “How strong are your instincts?” If you tell him, “I have no instincts, very little.” He says, “That’s no good for you.” The stronger the instincts you have, the better, because the stronger means the more and greater energy you have. You have to take that energy upwards. You have to transform it. Well, it’s the theory of Nietzsche. It’s exactly the idea of Nietzsche. The superman does not have to kill his passions. He has to canalize them for a higher purpose. Dominate them. Not let them dominate him but dominate them. That’s a Hindu idea too.

Now, generally when you are reborn higher, you are reborn not higher in a social status, but higher in race. It will take centuries and millennia for a man of a lower race to become an Aryan. Generally an Aryan is reborn as an Aryan. Unless he has done awful things, then he might be reborn very low. I suppose the men who tortured Streicher, for instance, would be reborn as Negroes. It wouldn’t astonish me at all. They would deserve it. Certainly they do. Especially if they were Aryans. If they were Jews, not so much. If they were Jews they would be more excusable. If they were Aryans, less ex­cusable.

I’m not a strong believer in anything that I cannot either see or prove with my own strength. I just take reincarnation as an hypothesis, a theory, if you like. But I do think that of the many, many theories that have been put forward to explain the unexplainable, reincarnation is the most plausible. It is at least the one that can be the best exploited for National Socialism. I told you of Khudiram, didn’t I?4 Telling me that he was a Shudra, and even if he was still a Shudra under the New Order it wouldn’t matter to him because he was born in the Shudra fam­ily because of his past sins in past lives. And he said, “Well, whatever I am in the New Order, I believe in the New Order because it’s true.”

True or not, I don’t know.5 But I know that if we had this kind of belief in Europe, and if a European of more or less pure Aryan descent could think, “If I’m good in this life, and if I stay good in future lives for another five hundred years, I might become a German. What a lovely thing to be. Or I might become, say, a Swede.” I wouldn’t say a Swede like certain Swedes are today, because not all of them are perfectly Aryan in behavior. Some of them take drugs and do I don’t know what. “But an ideal Swede, an ideal Nordic European, I’ll be­come that one day. Before I get liberated completely.” It would be a very good sort of propaganda. It’s better propaganda than what we get in Christianity. Heaven and hell. And of course hell, if you don’t believe in the church.

A few days before he died, Mr. Mukherji told me he “regretted nothing.” He often used to say that “after 1945 it is better to die than to be born.” And that he “didn’t want to be born again.”

I would not mind being born again if I were to be one of an Aryan family, kind to animals, vegetarian (as I have always been from childhood) and not opposed to me ideologically. I’d like to be sixteen again—and twenty-five, and thirty. But I must say that I would not like to be four or three—a toddler—again, or an infant. And one has to dirty one’s napkins [diapers] before one grows up and gets ideas. It is the way of all living creatures. And we are living creatures.

I don’t know whether such a thing as reincarnation exists or not, and don’t really care, conscious as I am of the part played by the body in the life of what they call “the soul”—whatever that be. A different body (even of the same race—for well-versed people in knowledge of traditional sciences say one is normally reborn within one’s own race, and most of the time within one’s own family).

All those spurious books (mostly American) according to which one can be a Negro or a Jew or anything else in one’s “next” (or have been it in one’s latest) birth, are just bunkum, a subtle and most pernicious propaganda in view of destroying the race consciousness of the Aryan.

With a different body I say (even of the same race or even family) one has a different conscious self, different personality. So that such “immortality” is not immortality at all—not one I can strive for at least.

No, as I wrote in the Preface of Pilgrimage twenty-seven years ago, the only immortality we National Socialists are sure of is that of the man who leaves sons behind him, sons of his own blood of course—and, I would add, of his own convictions. A NS man is not really immortal if he has one son, and that—a communist, as it can (and unfortunately does) happen. (I heard of such a case in modern Germany, alas!)

Or else, if not in his children, a man lives in his works. The workmen who built the walls and ramparts of the city that occupied around 8,000 BC—a hundred centuries ago—the place of Jericho, live in their work (excavated in our century). The potter who made and decorated a pot lives in the shards of his pot for all time to come.

I have no children, and the things I wrote are not original: they are as old as Life itself. I only tried to give them an expression connected with the problems of our times. It is the pleasure of the struggle that kept me alive that long, in spite of many daily inconveniences; still today I would wish to live on a year or two more—with hardly any eyesight, stiff, aching legs, all sorts of physical troubles, if I knew I would [one word is illegible] surely see “the Day of Reckoning” (der Tag der Rache) in all its terrific grandeur. And hear the victorious Aryan—at last united in a common consciousness of racial superiority—tell the world that has lied to us so long: Now we are wide-awake. Now is your choice: “Hitler or Hell!” (My own words in Gold in the Furnace, written in 1948, 1949, in the midst of the ruins of Germany.)

But I have given up hope of seeing that day. And rather than pull on and on with my ailments, I should be glad—as glad as Mr. Mukherji, my co-fighter, was, three and a half years ago—to leave for good this world of decay  . . .