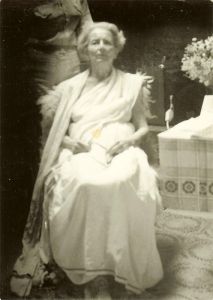 What follows is a gift, an act of conservatorship, and a crowd-sourcing appeal.

Many readers of And Time Rolls On: The Savitri Devi Interviews have asked me what Savitri Devi’s voice sounded like. Although I cannot make the original ATRO interview tapes available, I have many hours of other Savitri Devi recordings. I have been carrying these recordings around for more than a decade, and it occurred to me that I should make them publicly available, in case the originals are damaged or destroyed.

One of these tapes is in German, and the rest of them are in French, which is a problem for those who do not understand these languages. All of these recordings date from the last two years of Savitri’s life, after her stroke on March 30, 1981, which made it difficult for her to write. The first four recordings are letters to two friends, Georg Schrader and Miriam Hirn. (I wish to thank Georg Schrader and Miriam Hirn, both of them now dead, for making these recordings available.) The other recordings are reminiscences and historical anecdotes.

The first letter is to Georg Schrader, with whom Savitri stayed for about a month in 1982, from June 22 to late July. It is the only recording in German.

To listen in a player, click here or on the player above. To download the mp3, right-click here and choose “save target or link as.”

I apologize in advance for the recording quality. These letters were recorded on very cheap cassette tapes. I have used noise reduction to remove background hiss.

The best way to ensure that these recordings survive is for them to be copied and kept by as many people as possible. Also, if a native German speaker wishes to transcribe this recording, please contact me at [email protected]. Please contact me before beginning work, lest multiple parties end up wastefully duplicating efforts. Once as transcript is produced, I will translate it into English. Eventually, it will be included in an edition of Savitri Devi’s correspondence.